We need to accelerate our collective efforts to address the climate crisis, and TOGETHER Bay Area members are positioned to deliver nature-based and equity-centered solutions. TOGETHER Bay Area members are working on local projects that can advance the State of California’s goals as outlined in Pathways to 30×30 and other plans. A recent survey of our members revealed:

that TOGETHER Bay Area members are ready to implement and which meet the objectives of the Pathways to 30×30 Strategy.

These projects aren’t just nice to have. They’re essential for healthy lands, people, and communities with multiple-benefits including:

The range and depth of projects is inspirational! Please take a moment to virtually tour the projects below and get a sense for the impact our members have on the ground in their communities.

in funding that’s needed for just these 110+ projects over the next 3-5 years. This is not a comprehensive list of all of TOGETHER Bay Area members’ projects that could advance 30×30. More funding is needed.

Explore the 110+ examples of TOGETHER Bay Area member projects:

30×30 is important because we need to accelerate our collective efforts to conserve biodiversity, create equitable access to the outdoors, and support climate resilient lands across California. The goal of conserving 30% of California’s lands and waters by 2030 can galvanize leaders across the state to mobilize the resources and implement projects that address the climate crisis. 30×30 is important because today’s youth are looking to adults for leadership, and this is an opportunity for California to lead.

The Pathways to 30×30 strategy led by the California Natural Resources Agency set forth three objectives:

TOGETHER Bay Area members are poised and ready to help reach and surpass the State’s 30% goal. With the State Budget surplus going into a second year, this is a golden opportunity to fund projects that advance biodiversity conservation, equitable access to the outdoors, and climate resilient lands and waters. 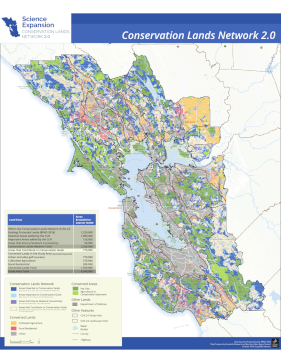 The Bay Area and Biodiversity

30×30 is a global movement, and the San Francisco Bay Area has been identified as a global hotspot for biodiversity. The region is fortunate to still have iconic species like mountain lion, Golden Eagle, and steelhead trout. Indeed, most species that represent the region’s former biological richness still survive. This is due in large part to the amount of habitat remaining – only some of which has been permanently conserved. One has only to look at the long list of Bay Area threatened and endangered species to know that, for those species and for the rest of the interconnected web of life, the remaining open space is just barely enough.

Since the early 2000s, the Bay Area conservation community of scientists and conservationists has engaged in science-based regional prioritization for biodiversity conservation. The Conservation Lands Network (CLN) is the region’s biodiversity conservation strategy, and it was most recently updated in 2019. Many of the 110+ projects described here help advance the goals laid out in CLN 2.0. In the project descriptions you’ll find efforts to conserve lands essential for monarchs, coho salmon, eagles, pollinators like bees, mountain lions, badgers, and other key species. The CLN has been funded by the State Coastal Conservancy and Gordon & Betty Moore Foundation.

Matching the rich biodiversity of this region is a rich tapestry of organizations working in urban, rural, natural, and working lands for biodiversity, equitable access, and climate resilience. Scan the list of TOGETHER members and you’ll find community-based organizations, Indigenous-led organizations, land trusts, resource conservation districts, open space districts, parks departments, water agencies, and others all working together in diverse and important ways.

“The network of lands in the CLN – including wildlife corridors, habitat connectivity, rangelands, riparian areas, and interconnections with the baylands – will give human and natural communities the best chance of persisting – even thriving – in the face of climate change.”

TOGETHER Bay Area surveyed its members in January – February 2022 for projects that could advance the three objectives outlined in the California Natural Resources Agency’s draft Pathways to 30×30 document. Thirty-seven, or 55%, of our members responded with information on 117 projects. Project locations were self-reported using this online tool. Members were provided opportunities to review and edit the projects before this site was finalized.

About TOGETHER Bay Area

TOGETHER Bay Area is a regional coalition of nonprofits, public agencies, and Indigenous Tribes working together for climate resilient lands – including lands that are natural, working, rural, and urban. We connect, convene, and catalyze action for a just and equitable society where we live in relationship with the land that sustains us now and will sustain future generations.

Back to the top